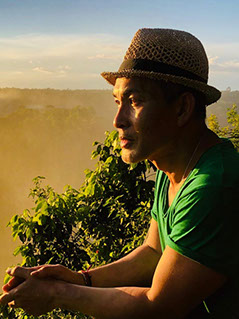 Ghaz is a Malaysian/Thai ceramicist based in London. He studied fashion initially in Kuala Lumpur and later in the UK at the Central School of Fashion, London.

He then worked as a designer/stylist at several fashion houses ultimately becoming Head Designer and Partner in a West End firm. He later became a freelance stylist in the advertising industry working with both fashion and also food styling.

Ghaz’ main inspirations are colour and form and a move to decorative and functional ceramics was a natural progression. He now bases his ceramic work at the Hoxton studio, Turning Earth.

Contemporary, fun and stylishly functional pieces are Ghaz’ trademark, many taking their inspiration from the natural world, particularly from his Asian background.

He creates mainly one-off pieces in limited themed collections.  Each piece is handmade, either thrown on the wheel or built by hand, or often a combination of the two. No two pieces are exactly the same.